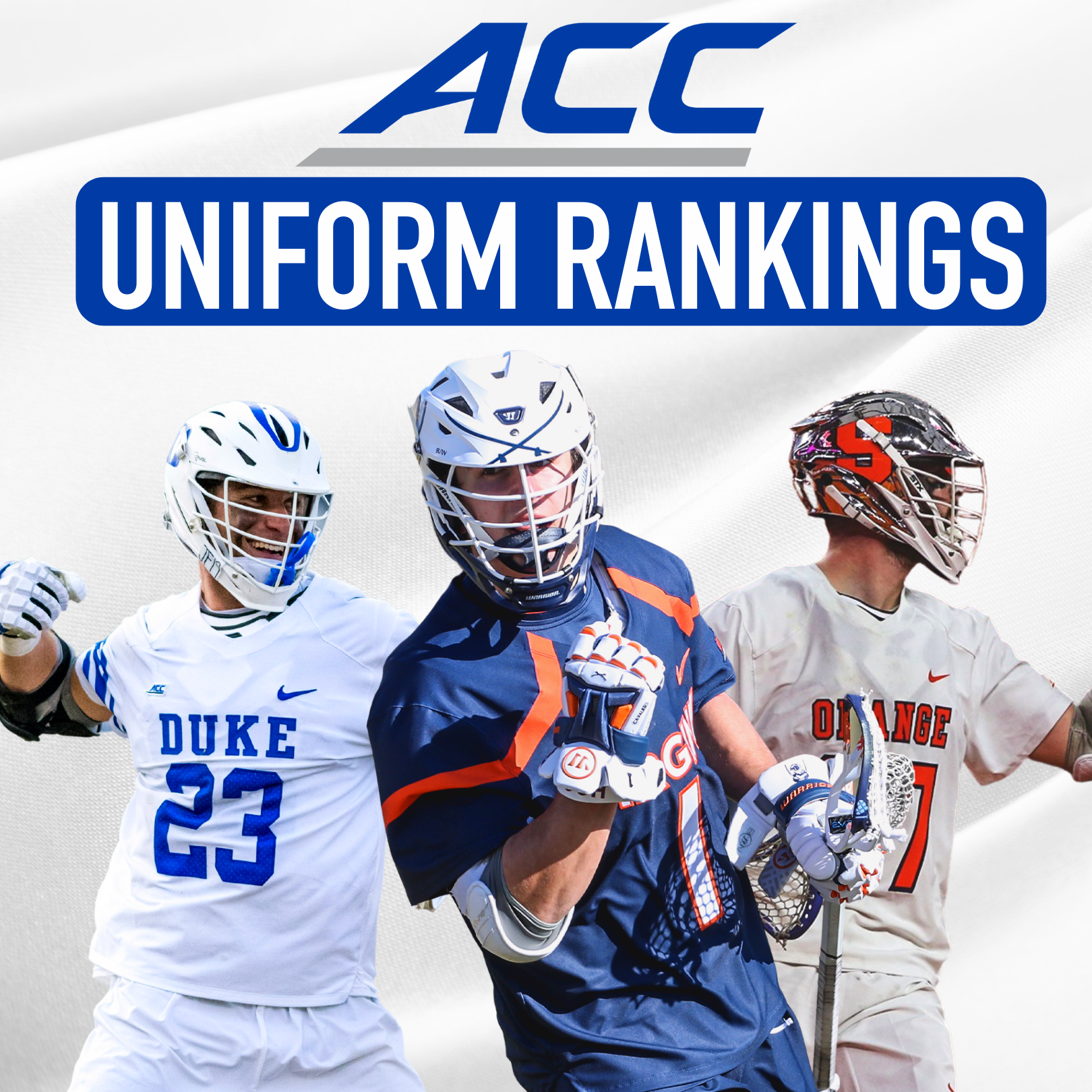 With the lacrosse season in full swing, it’s time to start taking an in-depth look at teams, especially the threads on their backs. Let’s dive into the ACC Lacrosse Conference and see how their uniforms stack up.

This week, we take a look at ACC uniform combinations and see where they rank among their fellow ACC schools. The conference has seen big changes in jersey design this year, so there’s never been a better time to rank uniforms.

Either way, these jerseys are only as good as the men who wear them. It should be exciting to see if any of these jersey combos hoist a trophy come May.

For some, this will be the hardest take on the article. Virginia is unrivaled when it comes to talent on the lacrosse field, but Virginia arguably has some of the most annoying uniforms in college lacrosse. Compared to Virginia, which had an elite rotation of three sleeveless jerseys, this is a severe setback.

Aside from the lack of color in the jerseys and the ACC lacrosse patch on the sleeve, my biggest complaint with this jersey is the clunky stripes running from the neck down the arms. Other than that, I really loved the font choice used and the numbering style.

As for the shorts, they couldn’t have been more basic. A Virginia logo and a colored band…

I’m all for the classic looks of world lacrosse programs like Penn State, but there’s nothing “classic” about it. It’s downright boring.

Syracuse is another program that usually takes the lead in innovations with uniforms. This is the first program I’ve seen wearing the Nike “Volt” color and they were one of the first teams to go sleeveless with Virginia.

This year, Syracuse has opted for a much more streamlined and classic look compared to past seasons. Even if it’s still a little simple for my taste, I liked it a lot.

For starters, I love the font choice on the style of the letters and numbers. The previous jersey had a clunky font and number style which I think made the numbers a bit harder to read. The new jerseys have very clean lines and lettering on the words and numbers. Also, I like the subtle difference between the white and orange jerseys with the white jersey having the word “Orange” stitched on the front and the orange jerseys having “Syracuse” on it.

Finally, I love the names on the back of Orange jerseys, simply because you don’t see it often in college sports but especially in lacrosse.

However, like Virginia, I hate how boring the short design is. With Syracuse being an elite Nike school, I like seeing them push the tempo, but given that the focus for the year was clean classics, I think they hit the mark.

The Duke Blue Devils come in at number three and the reason is simple: they have options on options.

Between the multiple combinations that Duke offers between the blue, black and white jersey and shorts, Duke is limitless in the options. But Duke’s two different white jersey options were one of my favorites this year.

The first white shirt with the blue numbers was seen in previous seasons, but I still like the design. Specifically the perforated numbers on the uniforms because they really add a visual element to the jerseys that you don’t see in most jerseys.

The next all-white jersey is a little more classic in style, but still brings some sparkle and dimension by adding three stripes of alternating sizes to both arms wrapping around the sleeve of the jersey.

Both jerseys pair perfectly with their blue or white shorts, creating the perfect look for game days.

Notre Dame arrives in force at number two. The reason for Notre Dame’s number two ranking comes from the clean lines and gold accents of their uniform. Notre Dame is the only Under Armor school in ACC lacrosse and they bring a unique uniform design with them.

Notre Dame’s white uniforms feature solid stitching throughout the jersey, with the large UA logo directly across the throat, following the blue lettering and number edges with thick gold embroidery. The jerseys also feature the ACC logo and American flag on the opposite sides of the chest which is a nice touch

Additionally, the sleeves also feature two bands of alternating colors. Another simple touch that brings a lot of definition to the uniform as a whole.

At the top of the list we have the Carolina Tar Heels. The reason UNC is at the top is because of the design elements and attention to detail in everything they do.

At first glance, the jersey looks like many others. However, the seamless design pattern of intersecting diamonds flowing from the side of the jersey to the side of the shorts is something unseen in any of the other ACC lacrosse uniforms. Most other uniform combinations come with very simple shorts. UNC shorts did not follow this pattern in either the home or away jersey.

My next favorite feature of the jerseys is the angry Tar Heel mascot design under the numbers on the back. The Tar Heel mascot is a very large and elaborate character with a lot of attention to detail in his face. The jersey managed to turn a large image into a backdrop for their jersey numbers on the back. In my opinion, this is one of the best college lacrosse designs simply because of the skill in creating something like this.

Who has the best facilities in college football?